Storm made it look easy in route to another World Championship of the World. They simply kicked ass without even sweating to win the A Bracket. Thunder beat out Gorilla Warfare in a tight B Bracket championship. 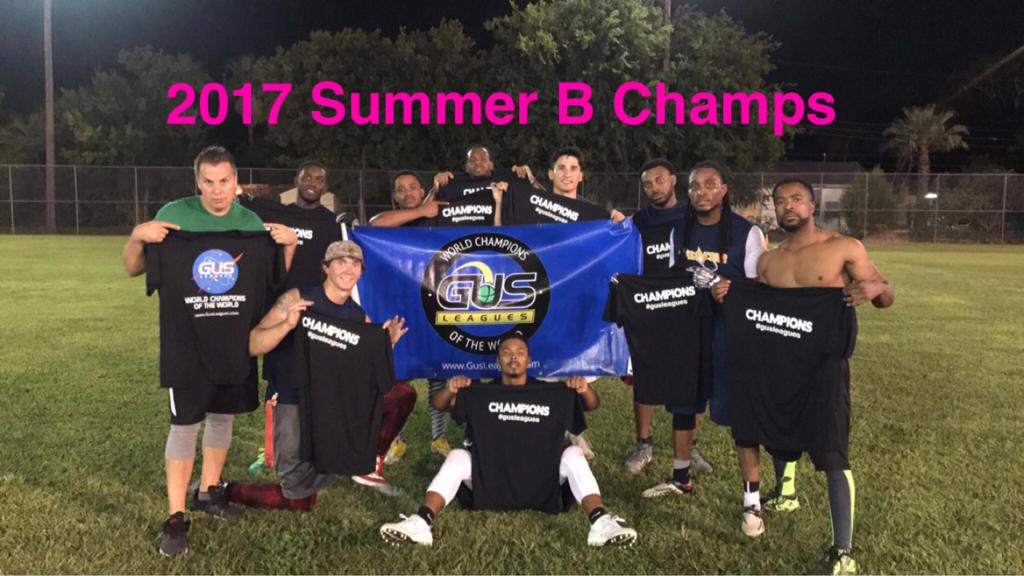 None of the games are really worth writing about except for the finals. SCF beat EZT by three scores but it was still hotly contested until the end. They couldn’t contain Jazz (SCF) but Drew’s team (EZT) never gives up; gotta give them props on their leadership for that. Thunder beat a Justice League squad who played the first half with 7 guys and found themselves in a 0-32 hole at half. I even overheard some of the JL guys talk about not even knowing this was playoffs. SMH.

In the semis, Gorilla Warfare and Thunder shut out their respective opponents to meet each other in the finals. Space City Flyerz and No Fly Zone have good squads and are hungry. Hopefully their merger next season results in continued growth.

In the finals, Gorilla Warfare, with their bench as deep as poetry, quickly pounced on Thunder to build 13-0 lead and went into half up 19-6. The Vela-less Thunder still have a team full of vets and didn’t panic. They battled their way back and scored their second TD in Plays before the end of the game—converting the all-elusive PAT. Ketchup intercepted a deep pass on the ensuing potential game-winning drive to seal it.

Playoff MVP:
Mark (Thunder) – After Vela fell down with an Achilles injury, Mark stepped up as captain of the team and kept the squad intact. With Maerz and Keifer filling in at QB, Thunder stayed competitive.

Results
Quarterfinals
(4) Storm                     33
(5) Thundercatz          12
This game was actually closer than the score suggests. Storm ran away with it in the end and Thundercatz had missed opportunities. With how hot Storm has been lately, they couldn’t afford any hiccups. JT (TC) stepped in as QB with Vick (TC) out but the Storm rush did a good job corralling him.

(3) Bandits                  36
(6) Jokers Wild           6
This will be the last we see of Jokers Wild until Brad (JW) gets healthy again. And Bandits left a nasty taste in their mouth to suffer through until they get back at it. Bandits are looking for an unprecedented fourth straight championship and are off to a good start.

(4) Storm                     46
(1) Purple Reign         7
It wasn’t even as close as the score suggests. Y’all recall seeing those videos of that big-ass Hawaiian boy who’s twice the size of everyone else and barrels through the other kids like a bowling ball? Like in the movie Little Giants? One kid is on his back. Another trying to pull his arm down. One is being dragged through the dirt by the leg. Yeah, that’s sort of how this game went. Moral victory: Purple Reign scored late to avoid the shutout. They all went home proud knowing they outscored Storm 7-0 in the final minute of the game. During crunchtime!

Storm had just 8 guys on the day and everyone contributed. Sinbad on the rush and at center. Kellen playing everywhere. Kenny being a rover in centerfield and catching everything in his radius. Jordan making people miss with regularity. Derek and Dylan filling in the tall-white-boy holes left by Brent, CB, and KP. Larry providing skill and size all over the field. And of course Matt leading the way with accurate throws, keen decision-making, and even providing boosts on D. There’s not much to say about the game besides Storm just dominating the field throughout the day.

Playoffs MVP:
Matt (Storm) – Led the way at Q. I don’t even recall a single incompletion. His team ran through to a 3-0 playoffs outscoring their opponents 123-31. Almost a 100-point differential on the day. Gaawwwddaammmnnn. Even after his injury in State last winter, he’s still slingin’ it better than most.